Battery Steele, Peaks Island
On a perfectly sunny and beautiful September 11th, 2011, we visited Battery Steele on Peaks Island.  It's a good 20 minute walk from the Ferry terminal.  We took a scenic route starting from the 5th Maine Regimental Museum.  Battery Steele can be easily accessed via the Peaks Island landfill.  Though it was a nice walk, it would be no problem to drive right up to the battery's entrance.  Other than a small metal sign on a pole in front front of the entrance, there wad no evident additional information.  A plague about the battery's history and function would definitely be in order.  Admission is free and the tour is self-guided.  As a person who has visited numerous abandoned fortifications with generally restricted interior access, I found Battery Steele to be extremely accessible and explorable.  Speaking of interior access,  I would highly recommend a flashlight for exploring the voluminous and very dark inner recesses of the battery. 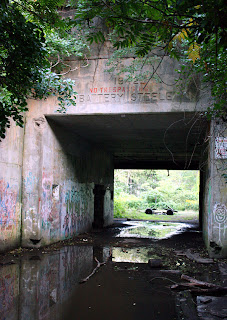 Entrance to Battery Steele
(The beginning of the main corridor is the dark area on the left hand wall). 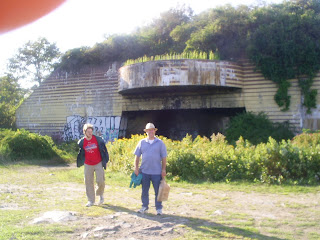 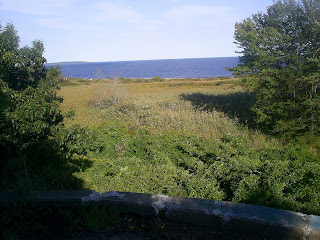 View of the ocean from the top Battery Steels 16-inch gun emplacement #2
During WWII, Battery Steele was part of the Peaks Island Military Reservation which occupied 198 acres (more than 25% of Peaks Island).  Battery Steele is an impressive concrete complex which measures more than 500ft long and perhaps 200ft wide.   Two 16-inch guns capable of firing high explosive shells weighing 2,240lbs up to 30 miles, were assisted by a very early computer which was supposed to help triangulate the position of enemy targets.  (In one of the upstairs rooms of the 5th Maine Regimental Museum dedicated to WWII, there is an interesting newsreel which showed the 16-inch guns being test fired in a wartime exercise and a surviving panel from one of the computers).
Though gun emplacements like Battery Steele were built to provide a defense against attack by German battleships, submarines (U-Boats) were the only known enemy naval presence in the waters off Maine’s coast during WWII.
The massive gun emplacements of Battery Steele are situated at each end of a extensive connecting concrete bunker complex which would have housed the command, communications and fire control center. 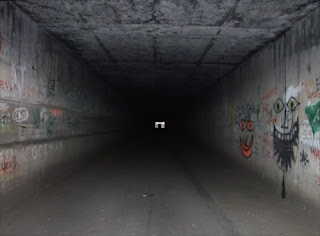 View of the main corridor which runs between the gun emplacements at each end of the battery  (For perspective on how massive this space is, consider that the tiny white spot in the center of the picture is the opposite end of the corridor). 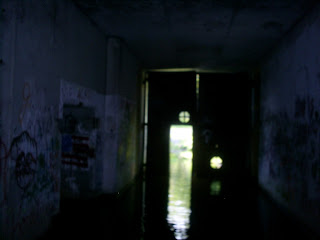 View to the outside from one of the large side rooms off the main corridor
Though the guns themselves are gone, it isn’t hard to imagine how impressive they must have been.  If we think about how incredibly loud rifles and shotguns are when fired and they have a barrel opening which is less than an 1 inch, it must have been a positively thunderous explosion whenever the battery fired their guns with a 16- inch barrel opening.
For me, Battery Steele is very sobering 3-D testament to the enormity of the U.S. war effort during WWII and Maine's significant contribution to national defense.  For anyone interested in keeping vital parts of our state's history alive, it should be reassuring to know that on October 20th, 2005  Battery Steele was put on the National Register.